When I first saw the trailer for Horizon Zero Dawn, the amazing landscape, the robotic wildlife, and the cool gameplay took an immediate backseat to my first thought, which was:

“Why is a white woman playing at Cherokee princess?”

(Seriously, Aloy as a kid has fucking feathers stuck in her hair, what the hell…)

Maybe it’s because every year, when Halloween rolls around, there’s a discussion to be held about cultural appropriation and how no, really, the Indian Princess costume is actually racist and appropriates culture that does not belong to white people.

In fact, Alicia BigCanoe, a Chippewa Woman of the Georgina Island First Nations, has been posting for three years now about how the clothing of her culture is not a costume.

Sadly, I think she’s going to be doing it for a 4th year, because people are slow to learn.

Here are some examples:

Hillary Duff and her boyfriend dressed up as a pilgrim and Indian for a Halloween party last year, and apologized for it.

Chris Hemsworth went to a Lone Ranger themed party and dressed in native culture themed clothing. And apologized for it.

The Party City store chain was told not to sell racist halloween costumes such as the sexy Pocahontas outfit.

So when I saw Aloy, that was the first thing to pop into my mind.

It wasn’t just her clothing, her use of the bow and arrow (popularized in games, I’d argue, by the 2013 Tomb Raider reboot), or the use  of the word tribe.

It was the combination of all those things and more.

In fact, while I had a general unease of the game’s main protagonist, it wasn’t until I was directed to the article What We Talk About When We Don’t Talk About Natives by Dia Lacina that finally put into concrete what felt off to me about the game.

Partly it was, as Dia Lacina says, despite native peoples still being around:

“But aside from Never Alone, we don’t get talked about much. Instead games like the Turok franchise, inFAMOUS Second Son, the original Prey, Assassin’s Creed III get talked about — games which have little to do anything with us, our diverse identities and cultures, or involvement. And when they do, it’s always disappointing.”

This article was pointed out to me by Tanya Depass of I Need Diverse Games, who dubbed the game Cultural Appropriator HZD, and it’s a quite fitting redub of the game’s name.

And what’s more, the people reviewing the games haven’t said anything about it as well.

I came across one geeky youtuber I had subcribed to talk about Horizon Zero Dawn, and you can see what she has to say about the game here:

So when there was no mention of cultural appropriation (after all, Aloy is wearing moccasins for crying out loud), I left a comment saying as much and got the following replies. 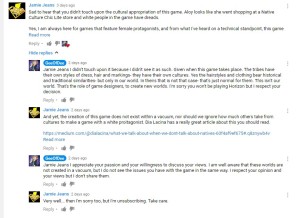 What struck me the most was what she first said: “I didn’t discuss it because I didn’t see it as such.”

If ever there was a perfect example of white privilege, then this is it.

For full disclosure, I am white, hailing from Canada, which means I burn if exposed to direct sunlight for more than 10 minutes.

There’s also a cognitive dissonance at play here when Gee of Dee says in one comment that yes, she knows games aren’t created in a vacuum, but in another says that the clothing of the tribes (note the coded word there) is unique to their own world, which exists all on its own.

Except this fictional world wouldn’t have existed were it not for the developers of Gurella Games, which is based in Amsterdam.  And it’s pretty damning of them that when the issue of cultural appropriation was brought up, narrative designer John Gonzales had this to say:

“That said, with the kind of culture of the internet that we have right now, it’s impossible to predict what it is that may offend,” Gonzales said. “Certainly we were not intentionally being insensitive, or to offend in any manner.”

You can read the full article from Polygon here.

Essentially, in a more diplomatic manner, John said that some people will look for anything to be offended by, something to get angry over, which is the kind of thing one would expect from Gamergaters, white supremacists, and sub-basement dwelling members of Reddit who complain about the breast adjustment meter for a 13-15 year old female character being removed.

On another review I read where I expressed the same concerns, this was the reply given to me: 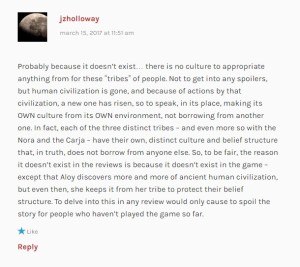 Again comes the cognitive dissonance that this is a world far into the future, where humanity has fallen, and that somehow supercedes the fact that it is a fictional narrative told in the here and now by a group of what I can only assume to be comprised almost entirely of white people.

Now, according to Gurella Games’ presskit, which you can download from the contact portion of their website, they’re a studio comprised of 200 people from 25 different nationalities. I’m pretty curious as to if there are any people of colour or members of other marginalized groups in that group of 200 or not.

[As of the writing of this article, I sent off an inquiry to Gurella Games asking them about the stats on the diversity of their staff and will update if I get a response.]

Which is not to say that having one black or Indigenous person in your group absolves one of problems within a game, or other media being created. No one person of any group can fully represent that group, nor should the responsibility be placed solely on their shoulders.

That’s what white privilege expects of them.

In fact, getting people who belong to marginalized groups into game development in the first place is, according to this article from the guardian by Chella Ramanan, still rather difficult on account of how much of a straight, white man’s world it still is.

It is also important to note that cultural appropriation is something that is, year by year, something that people are becoming less complacent with, thanks in part to online activism.

After all, Gods of Egypt crashed and burned when Ridley Scott got white actors to play the roles of black characters, stating that:

“I can’t mount a film of this budget, where I have to rely on tax rebates in Spain, and say that my lead actor is Mohammad so-and-so from such-and-such.”

It cost 140 million to make, and brought in roughly 12 million on its opening weekend, causing shares in Lionsgate to drop, according to an article from Variety.

Stonewall, based on the riot at Stonewall in 1970s New York, by Roland Emmerich with a white washed, fictional lead that erased black, transgender woman activist Marsha P Johnson from the historic event, came in at a staggering… 187 thousand dollars.

And there are other examples of whitewashing and cultural appropriation that the video game industry should heed lessons from. Ghost in the Shell and Iron Fist have both come under fire for having white leads that wear Asian culture like the next big trending hit, and the Ridiculous 6 starring and created by Adam Sandler was criticized heavily for its horribly racist caricatures of native women, with native crew members walking off the set in protest.

There is a good spot or two wherein a video game has done right by native people in representing them and their culture, and that is Never Alone, by Upper One Games. Starring a young Inupiaq girl named Nuna who, alone with her arctic fox, must brave the dangers of the Arctic to help her village. This game was created alongside the Inupiaq people, a native band in Alaska, and it is a delight to play while being respectful and informative.

And if you’d like something to read, I have a hearty recommendation in the book Killer of Enemies, by Joseph Bruchac, a Native American. In fact, the lead character, Lozen, was named after a legendary Apache warrior woman of the same name.

Set in an apocalyptic world, Lozen must follow the orders of the destitute remains of the 1% in order to keep her family safe until such a time that she can escape to freedom with them.

You can read an interview here with Joseph Bruchac in which he discusses the creation of Lozen.

We can do better.

We should do better, and as Dia Lacina said:

“Ask questions. Raise concerns. And if you feel unequipped to do so?

Find those who can and develop their talents if necessary. Look for Native voices. But also, know that you can use your voices too.

I believe in you, and I know you can do better.”

One thought on “Horizon Zero Dawn & The Dismissal of Cultural Appropriation”