It’s been awhile since Horizon Zero Dawn has come out, in fact it’s been a year, and after watching so much of its fans talk about it on tumblr, sharing fanart and fanfiction, I finally broke down and borrowed my niece’s copy.

I wasn’t too impressed with its trailer, which depicted its heroine, Alloy, dressed up in an outfit that was part post-apocolyptic and part hipster who just took an DNA test and found out she was 5% Indigenous and put together a quick outfit from the Halloween sale at the local dress shop.

In fact, I discussed my feelings before on what bothered me about the game initially.

Now, having put more than a number of hours into the game (in fact, I’m close to the end I believe), I find myself enjoying it, yet bothered by the White Saviour Narrative that underlines it.

As it’s been out for a year now, people should know there’s going to be spoilers abound in this, but I’ll still say, from here on there be spoilers.

In the world of Horizon Zero Dawn, we learn it’s far in the future, approximately a thousand years, where humanity is basically in the bronze age intermixed with hunks of technology here and there, thanks in part to machines that wander the Earth like they were living beings. Why has humanity regressed to this state?

Well, because a really rich white dude by the name of Ted Faro heralded a line of self replicating ‘Peace Keeping’ machines that ate biomass as a back up energy source, and someone screwed up the Shut Down Code, so they then started eating everything that lived, breathed, crawled, and swam on the planet.

So, the only way to survive was for humanity to shut everything away in giant underground bunkers, build a highly advanced AI to crack the code on the Faro robots, called the Faro Plague, and shut them down, then make more robots to clean up the Earth before cloning humanity and all of living nature into a reborn world. 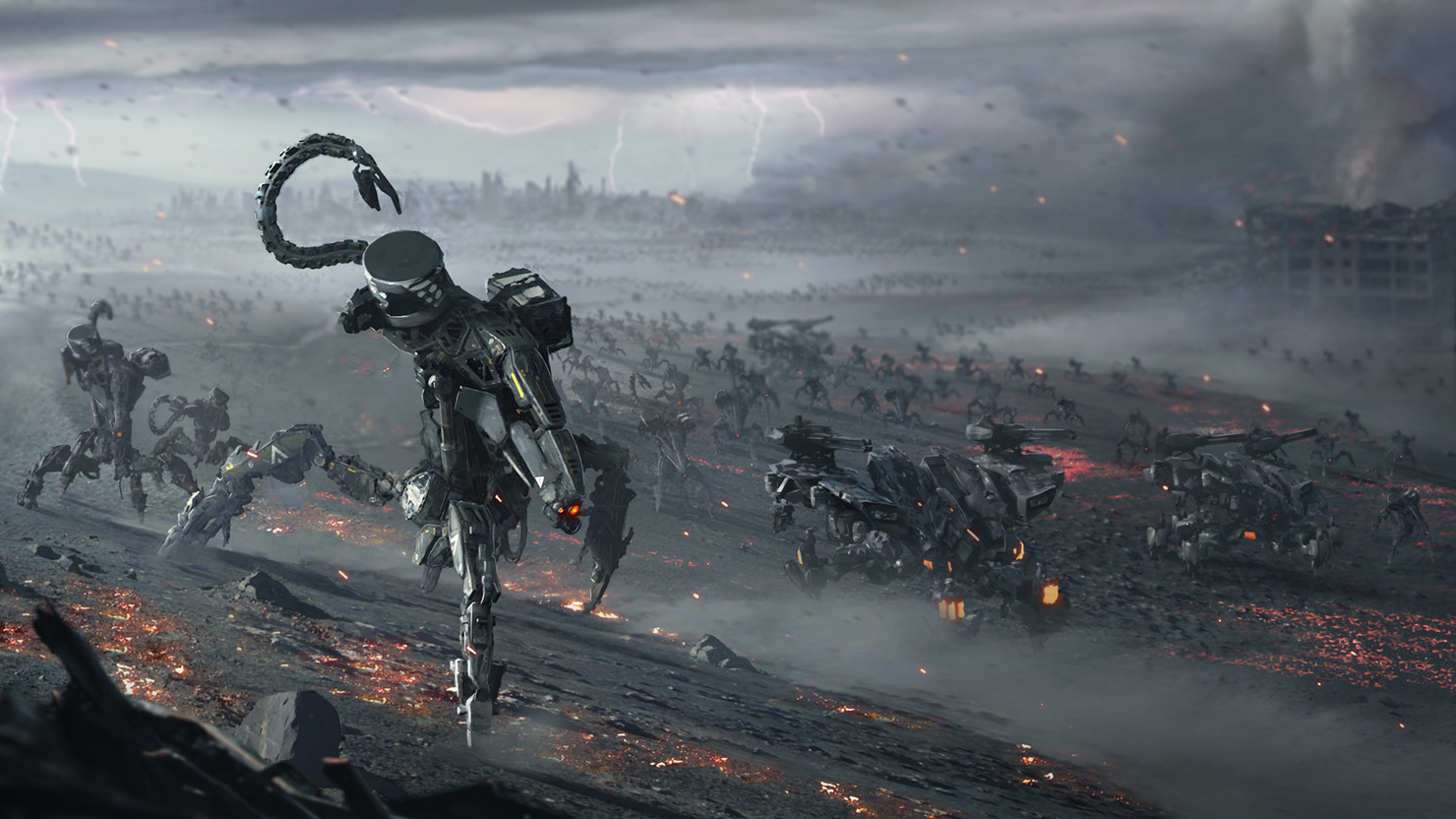 Imagine having THIS named after you.

As I learned about the backstory to this world, I once thought “Heck, no one saw Terminator, did they?”

Ten minutes later, we get a line from one of the designers of the Faro Plague robots where he says: “You’d think we’d known better not to do this, what with 150 years of science fiction telling us how bad an idea it is.”

Pretty meta, in a sense, and also not at all far fetched considering that just the other day, a Self Driving Uber Car killed a woman.

Enter Elizabeth Solbeck, who created Project Zero Dawn, and whom Alloy was cloned from. See, ends up there was a glitch, another faulty piece of coding with Gaia and so Gaia cloned Elizabeth, thinking she can solve the problem of another piece of coding that’s essentially gone rogue and is now trying to wipe out all life so that the Zero Dawn project can start over again.

Now, any story of a lone person fighting the odds and saving the world isn’t bad, nor is it unique. I quite like some of those stories and they remain close to my heart, stories like the Mass Effect trilogy (despite EA’s attempts to bugger it up), and Avatar – The Last Airbender, to name a couple.

But what gave Horizon Zero Dawn its White Saviour Complex is in how much the game developers borrowed from other cultures, cultures of people of colour, for the look of the Nora and the other groups of the game, and then made its lead a white woman who saves these cultures not only from the rogue program Hades trying to destroy the world, but their own ignorance.

Had Alloy been a woman of colour, I think much of this would not have been as bad as it is, but because Alloy is white, this White Saviourism is made that much more explicit and in your face.

Another aspect of this that really brings it to light is the language surrounding the Nora in the game itself. In your travels throughout the various lands, which are absolutely gorgeous (I had lots of fun with the photo mode), you come across journal entries that better expand on the world, and again and again, the Nora are described as primitive, savage, isolationist, and not trusting of outsiders. Heck, to venture outside the lands of the Nora is to be labelled an outcast, never to return, and it’s one of the traditions that Alloy breaks the Nora out of near the end of the game, imploring them to explore the world out there.

Combined with how different kinds of beliefs and religions have popped up in the world, including one based around the sun, there’s also a kind of anti-religious statement in the game, as though to say how sad it is that humanity believes in such things thanks to not being properly educated by the AI programs chock full of knowledge that they weren’t able to access.

Again, thanks to faulty coding and bad viruses.

All kidding aside, Jennifer Lawrence- I mean Katniss- I mean Alloy saving the world left a bit of a bitter taste in my mouth. The world of Horizon Zero Dawn has such a sad history, a melancholy one you see through holographic history files as you explore ruins, and there are interesting, engaging stories you become involved in along the way. The rise of the new Sun King as he attempts to force a new path forward from the bloody trail his murderous father blazed is one such story, and the ramifications, anger and suspicions of the other groups in the world regarding the Sun Kingdom was just so wonderfully done.

Helping Talanah rise to the top of the Hunter’s Lodge was another great side story in the Hunter’s Blind, righting a terrible wrong and making a good friend in the progress.

Helping Talanah by helping others…

And then there’s Vanasha, lively, fun, teasing, flirty, intelligent, plotting secret agent Vanasha and her quest to sneak out a child prince and his mother from under the controlling thumb of the Shadow Carja. 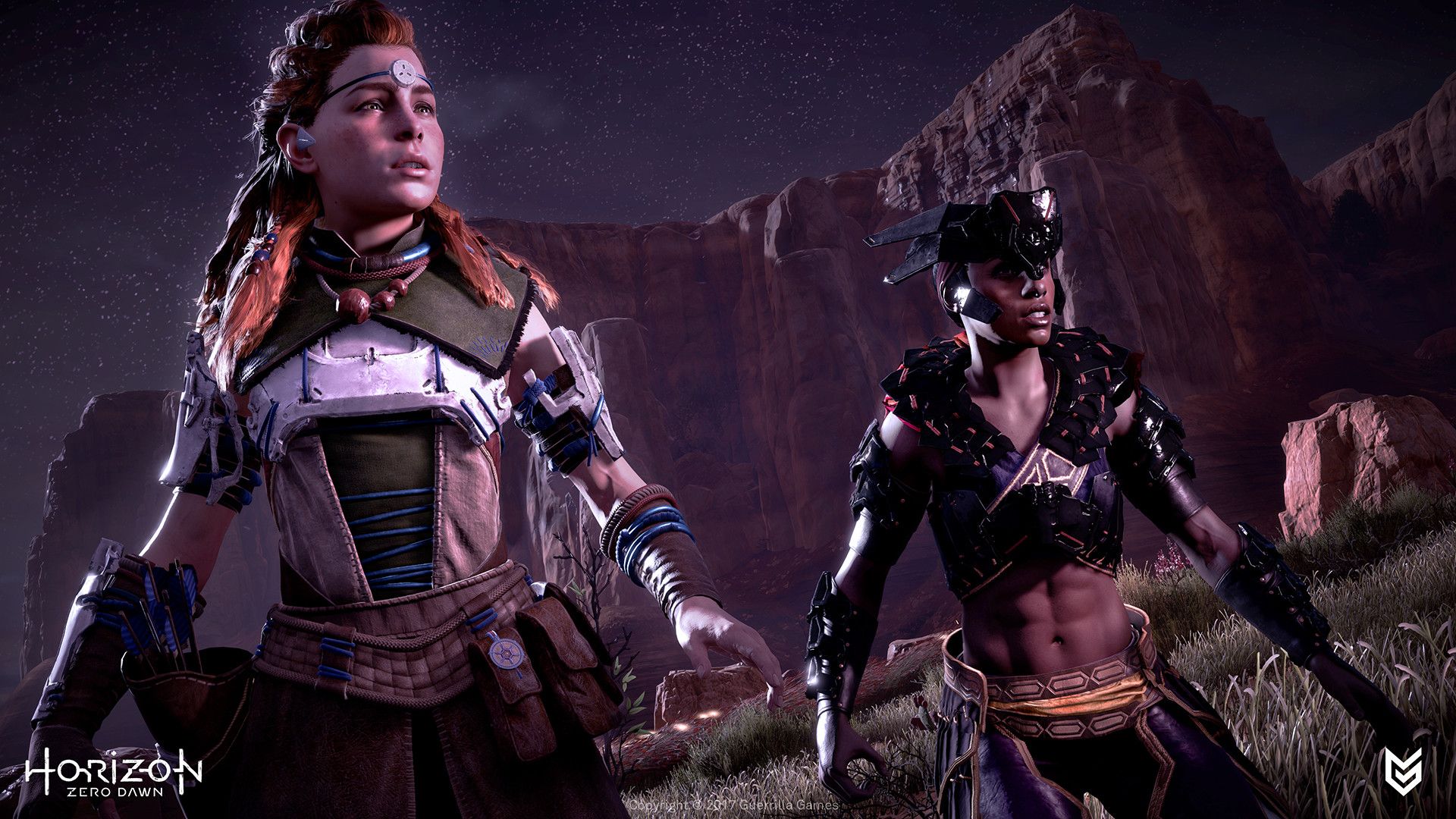 Did you know Vanasha is shredded? Because wow, is she ever shredded…

And of course, I can’t talk about the world without mentioning just how gorgeous it is, with its techno organic animals running about, and the stunning vistas of the environment as the world moves from day to night and back to day. It was obvious just how much work was put into this game, and to make an open world game feel alive and lived in and fun and amazing to explore in a market that’s saturated with open world games, which makes the white savourism of Jennifer Alloy Lawrence a disappointment.

That the game featured a female lead who isn’t objectified, even by the many outfits you get (with about the worst one having a belly shirt and the rest looking cool and functional with nary a boob armour plate among them), makes me wish someone had come in to point out the shortcomings of the writing surrounding Alloy.

The Carja Blazon, about as cheesecakey as the outfits in the game get.

Again, maybe if Alloy had been a woman of colour, my main criticism with this game would not have even been worth writing about aside from a note here or there.

Maybe in the future, even in the sequel, better writing will be brought to bear against this flaw in the game.