Well, I had a video set up to finish being edited, focusing on the news that Scarlet Johannson had accepted the lead role in a movie called Rub and Tug, wherein she’d be playing male transgender mob boss, Dante Tex Gill, which would have teamed her up with her director from Ghost in the Shell, Rupert Sanders.

(I’ll just point out briefly that her whitewashing in that movie’s role was, I’d argue the main reason why it was such a box office failure, as was Gods of Egypt and The Wall. Whitewashing means loss of profit, a lesson Hollywood has yet to learn, and the subject  for another time.)

So, for a while there, it appeared ScarJo was intent on playing a role that would have denied work for a marginalized community as well as enforced a transphobic trope, that transgender people are merely playing dress up instead of trying to live the gender that they really are.

This is, without a doubt, a victory for the transgender community, because it means that their voices were heard and that change is possible. It’s a bright spark of hope in some rather dark times, to be sure, because lets face it, the representation of transgender people, to say nothing of non-binary and non-gender conforming people, is absolutely atrocious.

One such example? Hillary Swank as Brandon in Boys Don’t Cry, a transgender man who runs away from home, finds a brief moment of happiness, and is murdered by transphobic people.

Dallas Buyer’s Club, starring accused sexual molestor and abuser Jared Leto, is about a man who contracts HIV and, while setting up a buyer’s club to get medication, befriends Rayon, a transgender woman. This is based on the real life story of Ron Woodroof.

Handled by the powers that be in Hollywood, such films are more an attempt at an Oscar grab, as was Jared Leto’s role in The Dallas Buyer’s Club that earned him an Oscar, than any chance to showcase transgender people living and loving and and exploring all aspects of their lives. What’s more, such roles aren’t even offered to transgender actors and actresses, as Trace Lysette, actress on the Amazon series Transparent, pointed out when news of ScarJo’s casting first dropped.

This was followed by up actress Jamie Clayton, best known for her role in the popular Netflix series Sense8, expressing frustration and not even being able to get into the casting room.

It’s especially frustrating when there are examples such as the Roland Emmerich flop, Stonewall, a movie based on a real, historical event and a majour turning point in the fight for rights for the LGBTQ+ community when Marsha P Johnson, a black, bisexual transgender woman, threw the brick heard round the world that instigated a riot, was replaced by a Indiana white gay man. It cost 13 million to make and brought in only $133 thousand dollars, with Roland Emmerich, himself a gay white man, defending his decision to erase Marsha’s role, saying “”It’s a good thing the film is out there now, but I never quite understood the fuss.”

So hopefully, with ScarJo opting out, things might be turning around, but there is still some things we can do.

For started, do not do as actress and director Justine Batemann do, and berate the critics and a marginalized community for getting a movie cancelled. 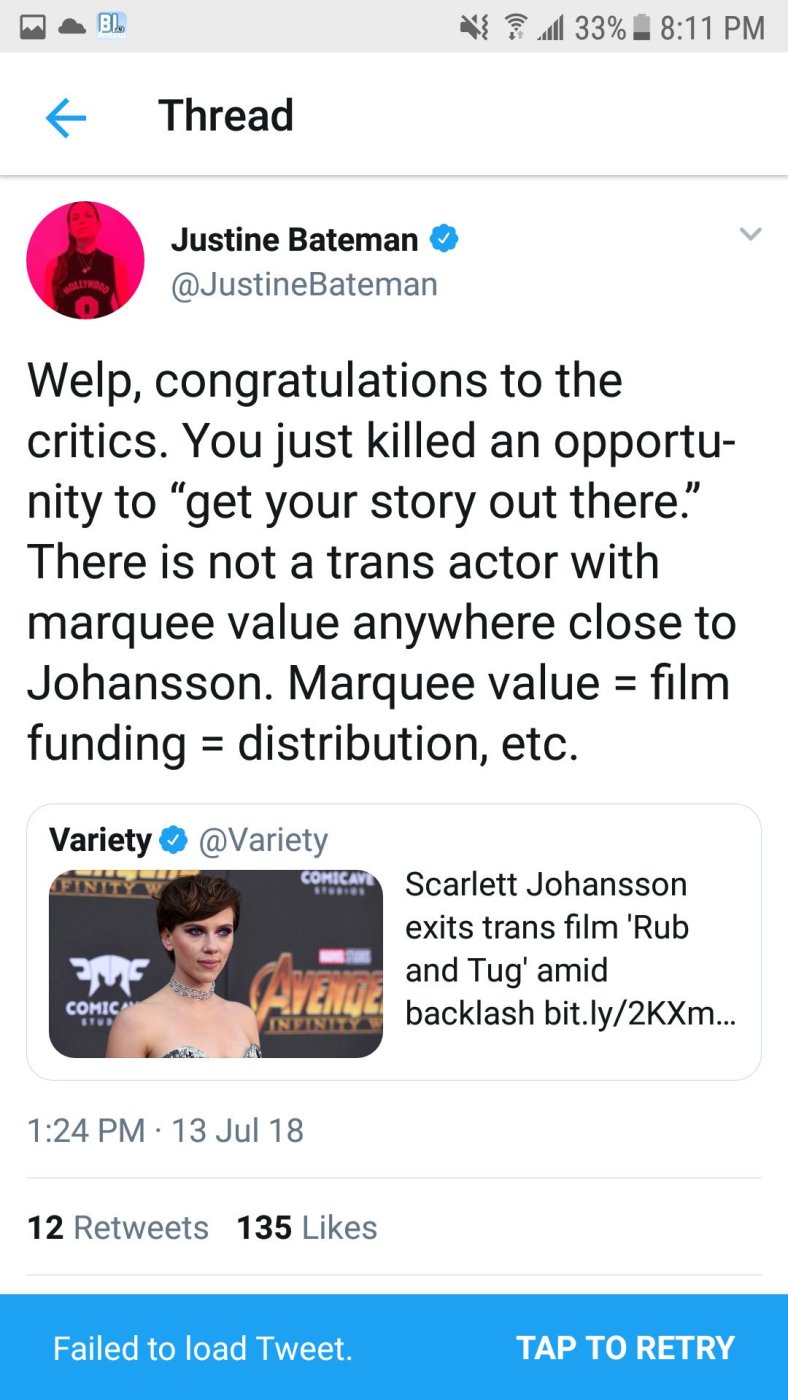 As anyone with access to Google can tell you, simply having an actor or actress with marquee value does not guarantee a successful movie. Any number of well established actors and actresses have starred in abysmal box office failures, such as Bruce Willis in Hudson Hawk, or even ScarJo herself in Ghost in the Shell.

You also shouldn’t then delete your initial tweet and a bunch of other, finger waving, lecturing tweets after being educated on how wrong you are. It makes you look like a coward.

As for actual constructive actions we can take that aren’t paternalistic-ally condescending, the first is that when such moves are made by Hollywood, we, cisgender people, can align our voices with those of Transgender people and call Hollywood out on this bogus casting. They can’t do all the heavy lifting, no single marginalized group should.

We can listen to them when they tell us why this is wrong and transphobic, as was written in this excellent article by Danielle Soizman for Slashfilm.com where she talked with other transgender actors and actresses and the ugly history of such casting in Hollywood.

We can boycott the films when they come out.

We can support shows and movies that actually strive for inclusion instead of exploitation, as as Janet Mock’s The Pose on FX and Sense8 on Netflix.

And in this case, we can read up more on Dante Tex Gill, in this fine article by Samantha Riedel, and learn more about this interesting person.