For those not in the know, Blizzard Entertainment banned Hearthstone player Blitzchung and two casters over the phrase “Liberate Hong Kong.”

Here’s the video in question if you wish to watch it:

To be honest, after much of what I’ve been reading about Activision-Blizzard, from the devil horn headed CEO Bobby Kotick to the company earlier this year laying off nearly a thousand people in order to prop up the profit of shareholders, Blizzard banning a game player for making a political statement is of no surprise to me. After all, Activision-Blizzard has shown its number one priority is the money it makes.

However, what truly concerns me was this phrase I saw in the ruling of the Hearthstone Grandmaster, which you can read on Blizzard’s own website:

Engaging in any act that, in Blizzard’s sole discretion, brings you into public disrepute, offends a portion or group of the public, or otherwise damages Blizzard image will result in removal from Grandmasters and reduction of the player’s prize total to $0 USD, in addition to other remedies which may be provided for under the Handbook and Blizzard’s Website Terms.

‘Or otherwise damages Blizzard’s image’ is such a vaguely worded phrase because of how easily it can be used to view anything negative about Blizzard as damaging. In this case, as Activision-Blizzard has 5% of its shareholders owned by a Chinese company called Tencent (who has a lot of fingers in a lot of pies from what I’ve heard), Blitzchung’s comments were easily seen as damaging to Blizzard’s image. After all, you don’t want to anger your investors who are bringing you in a lot of money via streaming overseas.

Now, Activision-Blizzard will want you to believe it’s ruling had nothing to do with China or Tencent’s investment in them, but don’t kid yourself. It was, and is, even if Activision-Blizzard has refunded Blitzchung’s prize money and reduced the ban on both him and the casters. More and more, entertainment companies are seeing China for the money making machine that it is, and they desperately want a slice of that pie.

And if human rights happen to be trampled and are being trampled by the Chinese Government? Well, you can just sweep all that aside. Bobby Kotick needs a new yacht, and you don’t want to be selfish and deny a man whose net worth is a measely 7 billion dollars, do you?

I heard once he finds it difficult to get dates on account of all the devil horn drawing. Allow me to immaturely continue that tradition.

Now, on a live stream of a game, they’ve banned someone for saying a political statement that could damage their image, I have to ask who else could they ban, block, or come down hard on. Say, you’re just a regular streamer on Twitch playing WoW classic and you note about some of the improvements on the game followed by criticism. Is that considered damaging the image of Activision-Blizzard? Would Activision-Blizzard send out a cease and desist to the streamer, maybe get in touch with Twitch and ask them to do something about it? Because the only other thing companies fear aside from losing money is litigation… which would also cost them money.

And yes, I know this decision was made within the context of a competition, but that phrase scares me, and it should scare you too. If some other competitor is wearing a Black Lives Matter shirt or showcasing the Pride flag somewhere in their room, would those political statements also be seen as damaging Activision-Blizzard’s image? What reassurances do we have from a company that values profit over human rights that they won’t ban other players for any kind of political statement, overt or otherwise implied?

And what of the precedent set now? Blitzchung and the two stream casters may have had their bans shortened, but they’re still bans. Will other companies follow in this stead? What if Fortnite’s company, Epic Games (who Tencent also has an investment of 40% of the shares) doesn’t like what someone says during one of their tournaments, will they also be banned? Or if someone gives thanks to the queer community for the help they received, or the black community… lord knows how over-reactive gamers can be another any kind of social justice, up to and including harassing developers and writers.

AreaNet, best known for Guild Wars 2, fired writer Jessica Price on account of some comments she made about the bigotry, sexism, and misogyny of gamers, something that is very real. AreaNet showed itself to be more in line with keeping the loyalty of some truly revolting people in a fandom that’s given rise to one of the most sadly influential hate groups/harassment movements online: Gamergate.

And she had done that on her own private Twitter, not in the midst of any stream in a competition.

All in all, game companies have shown time and time again their main concern is money, from breaking people down via the crunch period to instigating horribly addictive gambling practices that they’ve tried to pass off as ‘surprise mechanics’. That one would ban someone because of a political statement about very real government crackdowns is just not that much of a stretch.

Before I finish though, I want to add in one more thing, which is that currently, #BoycottBlizzard has become quite the trending hashtag on Twitter, and to those who want to boycott them, all the more power to you. While I have uninstalled Battlenet from my PC and all of the games from Blizzard I’ve bought, I realized I still had an account and wanted to delete it.

There was just one… small… snag… 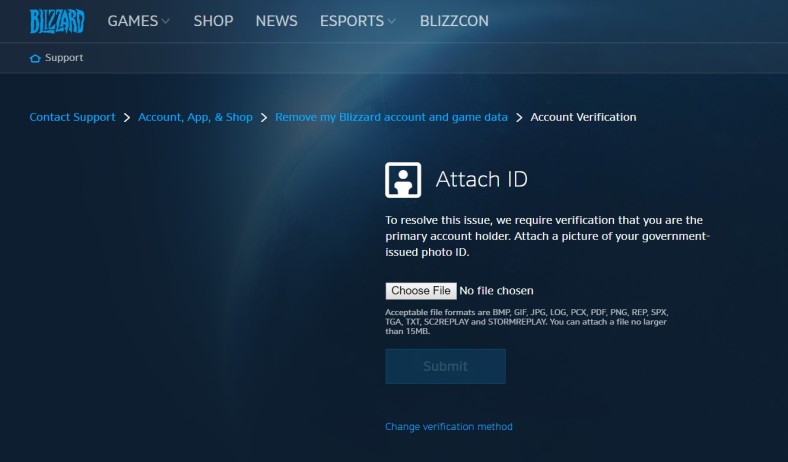 I am in no way giving Activision-Blizzard a copy of my government ID, ANY of them. Not my Driver’s License and certainly not my Passport. While they say that all personal data would be deleted, I find it mighty suspect that they want a copy of my government ID, especially after this public debacle* they’ve been rightfully raked over the coals for. Companies are always releasing statements about how the personal data they’ve collected is leaked, and I can’t help but wonder if Activision-Blizzard would accidentally ‘leak’ your government ID to, say… the Chinese Government.

It would make visiting the Great Wall a tad difficult.

At the least, I was able to delete all of my payment methods and some personal information, so they can’t charge me for anything, but in the meantime, I’m stuck with an account I no longer want.

*Although I’m unsure how long this policy has been in place, if it’s something more recent or been there all along.